A Kiss Before Doomsday by Laurence MacNaughton 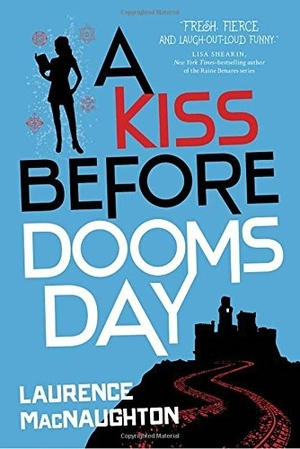 Dru Jasper, sorceress and proprietor of the Crystal Connection, has a huge problem on her hands. Sorcerers are disappearing off the streets, and the dead appear to be arising. If that wasn’t enough, there are also signs that someone is trying to start an apocalypse. Greyson – the handsome, cursed half-demon Dru has been trying to cure – has disappeared. Dru must do what she can to save Greyson and the world before it’s too late.

A Kiss Before Doomsday is a continuation of MacNaughton’s Dru Jasper series. The book kicks off in the middle of events – presumably where the first novel ended. It starts out at break-neck speed, and doesn’t slow down. Dru is a solid main character – smart, shrewd, and funny. Greyson is also well written as a complicated, cursed half-demon. The supporting characters are also complex, well-written, and read like whole characters. The plot moves along at a fast pace with no lag. It is important to read the first book, It Happened One Doomsday first, as there is very little backstory in this second book of the series. Overall, A Kiss Before Doomsday, is a fairly enjoyable book for fans of urban fantasy.