The Road to Jonestown: Jim Jones and the Peoples Temple by Jeff Guinn 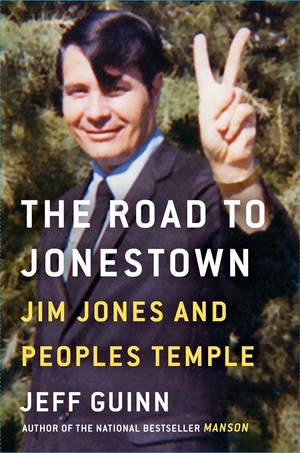 The Road to Jonestown, the new book by bestselling author, Jeff Guinn, opens in November of 1978 in Port Kaituma, Guyana. On that fateful day, 900 people collectively took their lives in one of the most infamous, mass ritualistic suicides in modern history. They did so at the instruction of their leader, Jim Jones: leader of the People’s Temple.

Jeff Guinn is no stranger to such horrific and scandalous American history. Guinn is a long-time journalist, investigative reporter, and author of 19 books, including the definitive biographies Manson: The Life and Times of Charles Manson, and Go Down Together: The True, Untold Story of Bonnie and Clyde. His background has prepared him well for this topic, and he is quite at home in his exhaustive and gripping treatment of Jones.

Jones’ story is fascinating. An innocent, Midwestern upbringing. A father left permanently damaged by WWI. A mother who was as unhinged and quirky as she was crazy. Jim grows up to be a young preacher who mixes the gospels and Marxism, and advocates racial integration before desegregation gained a following. He claimed to “cure” people. He mixed tent revival preaching with a hippy-like social justice message to gain a sizable following.

The money started flowing in. People donated their salaries, they quit everything and followed him. Soon after, madness ensued. Guinn handles this all extremely well and the book’s pages fly by as if you were reading a gripping thriller. The prose is tight and the chapters are short.

The book remains compelling even though you know the outcome, as if you were watching a car crash in slow motion. Jones was a dynamic and complex figure. He was at once a crazy cult leader and a social justice warrior. He pushed his followers to help the poor, and in the end, to follow him to a dystopian paradise in Guyana, to a collective death by suicide.

Guinn is said to have accessed tons of new material for this book. Thousands of pages of FBI files, interviews, newly released material – and the book is all the better for it. A lot of details are clarified and highlighted here for the first time (for one, the cyanide-laced drink the followers consumed was called “Flavor Aid,” not “Kool-Aid,” as was previously believed until now.)

In the end, The Road to Jonestown is an important, definitive, and exhaustive narrative about this event that occurred nearly 40 years ago. I also recommend, as a wonderful compliment to the book, the 2006 film Jonestown: The Life and Death of People’s Temple. A terrific documentary.