The Summer that Made Us by Robyn Carr 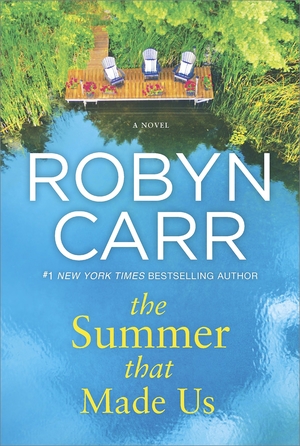 This is a story of family. This family includes four generations of mostly females: mothers, daughters, sisters, and cousins. The two Hempstead sisters led a wonderful society-filled lifestyle including summers at Lake Waseka. This idyllic place with the carefree summers was a relaxing respite for these high maintenance sisters. They continued this summer tradition even after they were married. The sisters had three daughters each in the span of six years. The cousins grew up looking forward to summers at the lake until one summer a tragedy occurred that left the family devastated. The older sister decided to close the cabin up for good. The six cousins eventually grew into adults with their own children and all went their separate ways for years. Then one of the cousins sends out invites to everyone to spend this coming summer together again as a family as this might be her last summer, due to illness. As the family members start coming together again to clean and refurnish the cabin, they each arrive with excess baggage to shed. Will this reunion help or hinder this dysfunctional family?

Robyn Carr has developed a few interesting characters for her story. One is a talented talk show hostess while another one is a newly released prisoner who has served her 20 years. Each of the characters have multiple issues to sort through. Her lakeside cabin setting is vividly depicted, and may even cause readers to succumb to its relaxing charms. The story has some dark themes and touches on cancer, prison, and mental illness – just a few of the issues that affect this dysfunctional family. The Summer that Made Us is a captivating story to read and it might make your own family seem far more put together by comparison!