Talking Sense About Politics: How to Overcome Political Polarization in Your Next Conversation 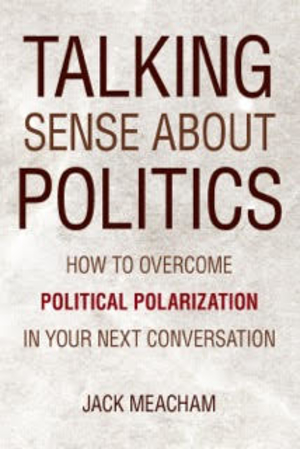 Nowadays, the very idea of politics is enough to start a social media flame war or send close friends at one another’s throats. Why have Americans largely lost the ability to have civil debates and discussions with regards to political concerns? Jack Meacham’s Talking Sense About Politics: How to Overcome Political Polarization in Your Next Conversation offers some very insightful observations about our political climate.

To begin with, this is a book with an introduction well worth reading; it clearly states the contents of the book and breaks things down immediately in a way that the layman can easily comprehend what is going on, using examples that most of us will be able to latch onto. The main theme of the book revolves around the idea that the bipartisan system of government is largely broken because there are not just two ways of approaching things in the political sphere. Instead, Meacham argues that there are four primary perspectives: Loyal, Tactful, Detached, and Caring. These four perspectives can be broken down into sixteen different dialogues.

“Political polarization is dangerous for the United States. Complex issues become oversimplified when forced to fit within only two opposing political positions. Simplistic and misleading representations of issues become obstacles to crafting workable solutions to move America forward. A climate of angry political polarization undermines the open and respectful exchange of ideas among neighbors, coworkers, and citizens that is essential for America to function and endure as a democratic society.”

The book presents the information in different ways, including traditional text blocks, tables, and by using various examples to illustrate the points. The examples include historical figures (presidents, politicians, athletes, explorers, authors, etc.) as well as fictional examples (book and film characters). There are also situational examples and simulations to offer ways other than a running dialogue of facts to explain the concepts. Thanks to the various approaches used in the book, the material is much easier to digest – the author basically covering various ways that people absorb information.

Does the book offer a guaranteed solution to the issue of an increasingly antagonistic bipartisan government? Not exactly. What the book offers is a way for people to begin engaging in dialogue once again with these “hot buttons” by recognizing the other person’s stance, and the best way to approach them with a topic given your own. This does require patience, and a willingness to actually engage rather than argue. The book offers historical examples aplenty to prove Meacham’s assertions, and to offer a light in the dark that compromise is possible.

This isn’t a fast, easy read. While the information is relatively easy to absorb, readers will want to spend time delving into the sixteen dialogues. With more and more people delving into political issues with a them or us mentality, this is a very good book to read. We need to talk about politics, but we also need to learn how to do it without alienating those we need to work with in order to enact real, positive change.