The Girl on the Bridge: A McCabe and Savage Thriller by James Hayman 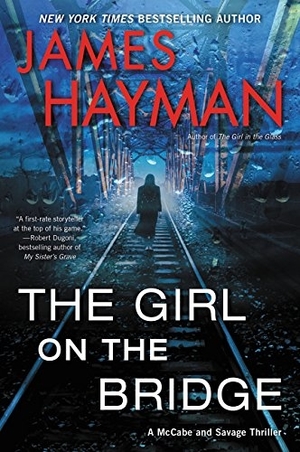 On a cold December night, Hannah Reindel walks out of her house and jumps off a bridge. Her husband understands the reason why, but is devastated. Hannah’s reasons stem back to a different cold December night – a college night rush party she attended with a friend and found her life changed forever. Hannah was drugged and brutally raped by six members of the college football team. No charges were ever brought against the six players who ruined her life. Twelve long years have passed by for Hannah before she made her decision to jump. One month later, one of the football players dies in a car accident. However, when another of the six is found brutally murdered by mutilation, detectives McCabe and Savage enter the investigation. They are eager to apprehend this assailant before any of the other men are murdered. Along the way, they realize they may be involved in something more sinister and heartbreaking than first imagined.

James Hayman is a New York Times bestselling author. The Girl on the Bridge is the fifth book in this particular detective series. The story flows easily as the author is a superb storyteller. The detectives refer to a few past cases from previous novels in the series, but the book can easily function as a standalone story. It does contain violence with the rape and murders, so readers beware. This is a novel that can inspire readers to think about their own reactions to decisions in their own lives. The Girl on the Bridge is a good addition to this detective series!