Still Can’t Do My Daughter’s Hair by William Evans 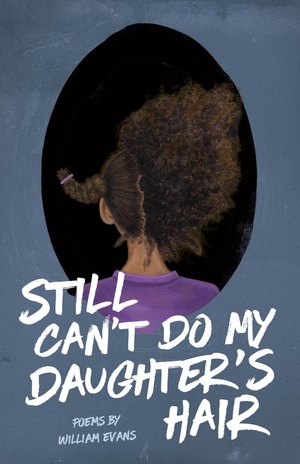 In this day and age, it’s hard to dispute the importance of a voice; moreover, particular voices. Diversity in voice and story has never been more important. We need people of all races, religions, sexualities, sexual identities, etc. telling stories – whether fabricated or based in reality – that move readers, shape them, invite them in, and help them to be all the better for it.

Poetry has always had a way of doing this to the best of us. When encountering a poignant, well-crafted verse, it is difficult not to feel the heft of the words. Whether by the metaphors, the descriptive illusions, or even the perfect placement of a line break, a good poem is a good poem, and readers can’t help but thank the stars when they come across one.

Lucky for poetry admirers near and far, Still Can’t Do My Daughter’s Hair is filled to the brim with ridiculously good poetry.

Written by seasoned poet, William Evans, Still Can’t Do My Daughter’s Hair is a collection of poems set around the concept of family, navigating everyday life as a black man in America, the experience of growing up, musings on death as a person of color, and the struggles of one’s mortality. As implied by the book’s title, many of these poems focus on Evans’ young daughter, tackling his fears of the world she is being raised in, and his personal journey as a father. Evans also has several pieces about his wife and his parents, as well as poems about people in his youth: friends, neighbors, lovers, and the ones who didn’t make it. He also has three poems that tie in pop culture (Teen Titans Go, Black Panther, etc.) with his personal experiences of being black.

Evans writes in such a manner that is profound and relatable. He has an ease about his words, but he always manages to strike at the heart of the matter in each of his poems. His talent shines in every piece, but especially in the ones about his daughter. Lines appear such as, “My daughter loves me / and a crow is released from my throat. My daughter misses me and I / am not worthy,” ready to shake the reader to their core. There are poems about Evans placing his daughter in a school of predominately white children, and he writes, “And isn’t this what I went to college for? / To buy a home in a place where / my daughter can learn about death from small animals / instead of classmates?” Needless to say, every poem in this book has a line that will make readers stop in their tracks. He writes not only about his family; every poem focuses strongly about the experiences of being black in America, which he writes so honestly, and, seemingly, without fear. Another stand out verse is, “Blades / like me dull if we ain’t been pulled / through the throat of something / we can’t name.”

Evans’ has a great deal of experience in spoken word poetry, and his book reflects this. All of the poems are written in free verse, and are easy to imagine being performed aloud. Most of his poetry is formatted as one block of text, sometimes several stanzas, or other common line breaks found in page poetry. However, the poem “Jasmine, Whenever” uses the spacing between words in a fascinating way. The poems “Three Parts (Black)” and “The Street Lights Watched” deliver bulky paragraphs, and longer text lines. The poet plays with space on the page in these poems, and several others, allowing readers to discover something different with each, new title.

If readers are interested, but still hesitant, they can dip their toe in the poetic waters by finding some of Evans’ work online. Two of the poems in this book (“I Turn the Volume Down Because Beyonce Says Fuck” and “My Wife Is Shaped Like“) are featured on the Button Poetry’s – the publisher of this book – YouTube channel, as well as many other videos of the poet performing. He is also one of the co-creators of the web-site Black Nerd Problems and regularly writes articles and reviews for the site (like his amazing Game of Thrones recaps).

There are so many wonderful books of poetry coming out these days. Readers would be at a loss to not have Still Can’t Do My Daughter’s Hair among their collection. William Evans is a name that should grace the shelves of anyone who enjoys a damn fine poem.