The Door Before by N. D. Wilson 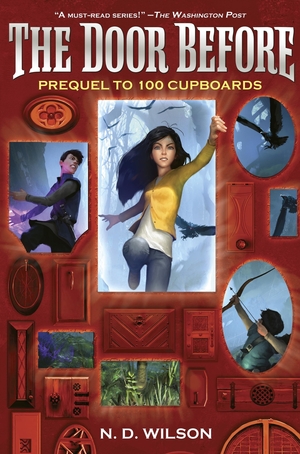 N.D. Wilson’s prequel to his 100 Cupboards series, The Door Before, is a tale that combines suspense, fantasy, action, and humor. This story follows Hyacinth Maxine Smith, whose parents work for the Order, an organization that tracks down evil creatures and imprisons them. Her father’s latest person he had tracked is an enchanted man with two mouths. As they venture to their new home with the captive, a near death experience of the cliff collapsing before them makes them question the captive’s power. At their new home, Hyacinth and her four siblings meet their great-aunt, Granlea, who along with her brother, had been messing with the power of lightning trees to create doorways to new worlds. Two brothers, Caleb and Mordecai Westmore – Mordecai being a seventh son of a king – come out of one of the doors along with the witch-queen of the world Endor. Hyacinth, along with the two brothers will have to trap the powerful witch-queen to save all the worlds.

This story is told through the third person point of view, and it mainly focuses on Hyacinth Smith. Hyacinth displays character growth throughout the story as she learns of her magical gift. Even at her young age, she becomes very independent when she is left with her younger brother at their home as her parents bring the captive to the Order. Not only is she courageous, but she is also mindful of nature and never wants to take away power from the lightning trees. Mordecai and Caleb complement her character as otherworldly individuals who deal with magic and witches on a regular basis. The group dynamic is well-written, as they share ideas, work together, and learn from one another. The addition of the character Kibs towards the end of the story adds enjoyable humor as a reluctant sidekick to the powerful trio.

The descriptions and world building are very unique. The Order is original and adds tension throughout the story since Hyacinth’s father has to hide her powers from them. The witch-queen, Nimiane, has unique powers and her creatures that she controls as well as drains power from are a great addition to the disturbing monsters that Hyacinth and the group must battle. The forest of lightning trees and their protective powers adds to the theme of good magic versus evil magic.

This story combines the themes of good versus evil, bravery, strength and power. Though this is a prequel to a series, it can stand on its own, and therefore should not cause any confusion. Towards the end of the novel, the view point shifts rapidly, changing from character to character, so pay close attention to the fast-paced action at the end of the novel for full enjoyment.

The Door Before is an action-packed novel with unique fantasy, magic, and world building. This is a good read for fantasy and science fiction fans, as well as for people who enjoy fast paced and suspenseful tales.