The Losers Club by Andrew Clements 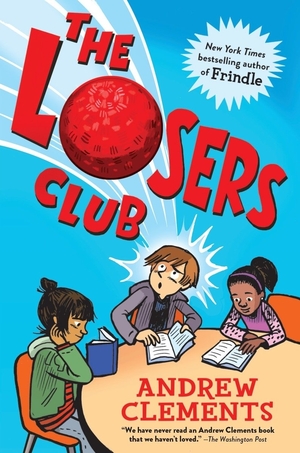 If your middle school reader does not like reading, that will change after he reads The Losers Club. Kids will easily identify with Alec as he navigates his way through school, bullying, and finding his “spot” in the middle school pecking order. Alec loves to read; he loves to read so much he misses most of what is going on around him including his classes. The principal decides to put him in an after-school program to teach him a lesson. He has three choices for activities or he can create his own club. Since all Alec wants to do is read, he decides to create his own reading club called the Losers Club. Alec gets surprising results with his club which leads him down a path he would have never expected.

Clements writes with humor and a dose of reality. Clearly, he knows what resonates with middle schoolers. Readers will pick up on themes of what’s cool or not cool, the age-old challenge of bullying, and that school success is a positive outcome. The joy of reading is portrayed in a positive light and friends can turn out to be those you did not anticipate. Lessons of kindness run throughout the book and the list of suggested reads is a nice bonus.