The Ghost Ship of Brooklyn: An Untold Story of the American Revolution by Robert P. Watson 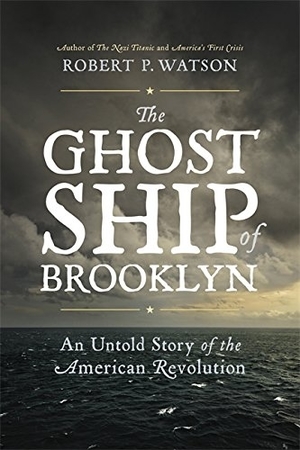 This is a history book of an element of the Revolutionary War most likely little known to us as Americans, and certainly not recounted in our elementary or high school education about the War. From 1776 through 1783 a series of about seventeen British ships were used as prisons in Wallabout Bay (between the current Manhattan and Williamsburg bridges at the site of the Brooklyn Naval Yard Development Corporation). These ships held American prisoners taken by the British during the war. Most held 200 to 500 prisoners at any given time. The Jersey, which was the most well-known, feared, and hated, was placed there in 1780 holding 500 prisoners measuring 144 x 41 ft. Each subsequent year the number of prisoners rose with 1,000 to 1,200 being held for the last two years. This history lesson is focused on the use of these prison ships and the horrendous world in which these men lived but mostly died. The estimates of men dying on the Jersey during its four years moored as a prison are of more than 10,000.

As introduction Robert Watson presents some history of the ship, the beginnings of the war, and initial handling of prisoners by the British and the Americans. As the war progressed because of the initial failures of the Americans in battle and the British frequent capture of American ships, there was a larger population of prisoners to be handled. Initially these prisoners were held on land in churches and other buildings. As there is realization the war will not be over in a few months the use of ships begins. These ships were primarily used to “house” sailors from privateers and not felt to be subject the usual care of soldiers and sailors of a nation at war: these Americans were considered traitors or rebels. Through the remainder of the book Watson retells the stories of a few of the survivors who ultimately wrote memoirs and histories of their experience, providing information about non-survivors as well. The final portion of the book recounts the end of the ship and what is known of major British and Loyalist individuals and the creation of memorials that took over a century to complete. There is an extensive series of notes documenting the sources, and a large bibliography including internet sites. For anyone interested in the Revolutionary War, this is a well-written, well-structured, informative, and evocative presentation of the horrors from which these men perished and few survived.