Goodnight, L.A.: The Rise and Fall of Classic Rock – The Untold Story from inside the Legendary Recording Studios by Kent Hartman 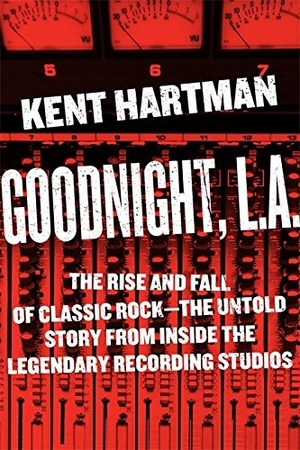 Following up on his book about the legendary L.A. hit makers The Wrecking Crew, Hartman takes a different tack in this book about LA Rock in the 1970s. He weaves the story around producer Keith Olsen, his studio Sound City, and session guitar player Waddy Wachtel. The book is easy to read, and highlights the role of accidental meetings and networking with the ups and downs of the music business.

Olsen provides a realistic picture of the many irregular bounces the music business ball takes. At a considerable investment of time, energy, and money, Olsen encourages, endlessly rehearses, and attempts to sell an album by Lindsay Buckingham and Stevie Nicks. When that album fails to achieve notoriety, he then convinces them to join hands with Mick Fleetwood and John and Christine McVie in the band Fleetwood Mac. As Hartman describes the story, not only is Olson out in the cold after producing one best-selling album, he even has to sue them to receive the limited royalties that they have agreed to pay him. When he tries to call Nicks to figure out what is going on, she replies that “they told me not to talk to you!”

Similarly colorful stories involve Tom Petty’s declaring bankruptcy so that he can get out of an abusive record contract, the life and times of the Cowsills and a variety of session players, artists, producers, and engineers. By the end of the book both of his main characters are still working in the business, but as record sales and recording budgets increasingly diminish, Olson is focusing on developing new artists, rather than working with a combination of newbies and established acts, and Wachtel finds himself on the road with aging rock stars instead of spending every working hour in the recording studio.
Although the book is enjoyable and easy to read, there is a certain lack of perspective that occasionally filters through. Nathan East is virtually the only black musician ever mentioned. When writing about musicians, Olson mostly discusses rhythm sections – the guitarists, bass players, drummers, and keyboard players. During the 70s such disparate cities as New York, Detroit, Memphis, all had black rhythm section players, in some cases multiple players. For example, if the book was about New York in the 70s, it would have to include drummers Pretty Purdy, Jimmy Johnson, and Herbie Lovelle, keyboard players Paul Griffin and Ernie Hayes, bass players Jerry Jemmott, and guitarists Eric Gale and Cornell Dupree, etc. Were there no black rhythm players used in L.A. rock records, and if so why?

The other elephant in the room is the role of women on the scene. Other than a handful of artists, including Pat Benatar, Linda Ronstadt, Christine McVie, and Stevie Nicks, there is never any mention of how women fit into the lives of the producers, musicians, and engineers portrayed. There are occasional references to groupies and female fans, but with all of those love songs and in many cases multiple marriages, women are presented more as objects than as human beings. Granted that this may well have been the prevailing attitudes of 70s rockers, but we are thankfully living in a different world today.

Sometimes Hartman seems to be over-selling 70s music, at the expense of other music styles. For example, to describe grunge music as “highly distorted sound aimed at eliminating all subtlety,” would be just as narrow-minded as calling 70s California rock entirely formulaic and simplistic. Neither assessment would really tell the story.