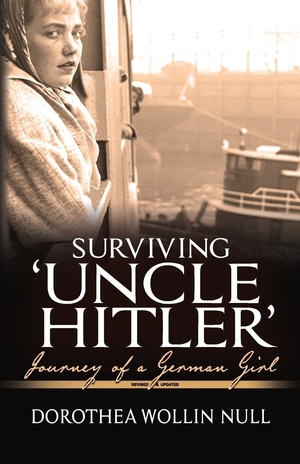 Dorothea Wollin Null was a young six-year-old German girl who lived happily with her family when her world, as she knew it, drastically changed. It was 1943, and she lived in the city of Stettin, Germany when the bombs landed on her very street and her family fled their home. They left with nothing to seek refuge with family members who lived outside the city. She had grown up in Stettin and was used to hearing blaring sirens her whole life. When the bombs landed in her city and her street, she was so frightened that she lost her ability to speak. It took months before she found her voice again. In this inspiring memoir, we learn about her journey and all she had to endure, both physically and mentally, as she traversed across Europe seeking help from family to family over the next few years. Along the way, she searched for meaning as to why things happened as they did. She looked for love and guidance from her mother who seemed unablee to return her love. She grew up praying for ‘Uncle Hilter,’ as all German children were taught. She knew no other prayers. She was in her early thirties before she found her Faith in Christ and some solace for herself.

The author’s inspirational story of her family’s adventures of survival was somewhat daunting to read. It is written in first person and includes a brief biography of Adolf Hitler written by her brother, Lothar Wollin. She also graciously included family photographs. This is a short book written from the heart and contains her personal memories about a tragic time in history and how these actions affected her life. Surviving ‘Uncle Hitler’ is written with grace and courage.