Among the Ruins by Paul L. Williams 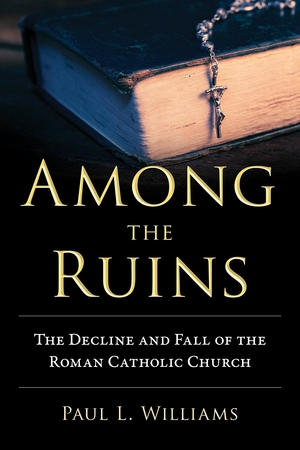 This is an EXPLOSIVE book! It is a catalogue of betrayal of the Church’s status as the world’s leading religion and alliances with worldly organizations for monetary as well as political gain. The author was a devout catholic while growing up in Scranton Pennsylvania. He does not say exactly when he lost it, but his faith, at least in the Catholic Church, was surely gone shortly after the second Vatican Council of 1965.

Backtrack to 1929 when a faltering, destitute church was approached by Benito Mussolini with “such a deal.” In exchange for church lands, he gave the Church ten million dollars, tax exempt status in Italy, and its status as a sovereign state. This was the Lateran Treaty. The Church flourished.

At about this time, the Vatican bank redefined the purpose of money to sidestep the Church’s stand on usury thus allowing it to become a for profit business. Thus, the stage was set for explosive growth in church finances and concordant opportunities for skullduggery.

Among the Church hierarchy, Bishops, Cardinals and several Popes, were Freemasons, a group which had been anathema to the Church in earlier times. This provided a bridge to participation in geopolitics with the CIA and their tools the Mafia.

Whoa, you might say, but the author has provided a narrative which is believable, as described and has named names. The thing that these entities have in common is secrecy. The Church, Freemasons, the CIA, and the Mafia are all secret organizations answerable, apparently to no one. Not a situation to inspire spiritual awe in anyone aware of the situation.

For those not aware, the second Vatican Council, at the auspices of Pope John 23, threw away centuries of distinguishing dogma and made common the rituals of worship. The author lists nine heresies of Vatican 2 that opened the church up to participation by other faiths and, in fact, made them equal as means to salvation and in all other things as well. Thus, the end of its uniqueness, its singular attraction to worshipers resulting in its decline in the numbers and steadfastness of its parishioners.

With determined scholarship and documentation, Paul Williams has laid bare the whole sorry spectacle of an organization gone bad from forgetting its original purpose and mission. The final question is, I think: is another resurrection possible?

This is Paul L. Williams’ third book, preceded by: The Vatican Exposed: Money, Murder and the Mafia (2003), and Operation Gladio: The Unholy Alliance Between the Catholic Church and the Mafia (2015). Potential readers should note that it seems that only the material on the Second Vatican Council is new.