On the Frontlines of the Television War by Yasutsune Hirashiki, edited by Terry Irving 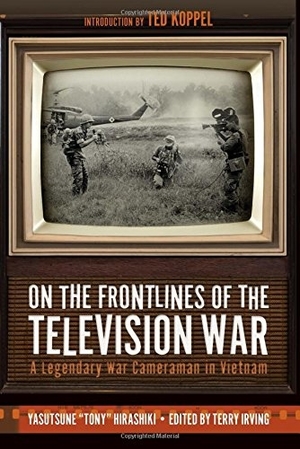 This is a memoir of one man’s experience during the Vietnam War, beginning approximately April of 1966 and ending April of 1975 with the fall of Saigon. It is a beautifully told story by a cameraman with 10 years of experience in Japan who wanted to become a photojournalist like Robert Capa – one of the greatest combat photojournalists in history. Hirashiki quit his job, left Japan and flew to Saigon with a letter of recommendation/introduction from Jack Bush, the ABC News executive from New York in charge of worldwide film operations. While at first not given a definite job, Hirashiki’s persistence and enthusiasm resulted in his being utilized and ultimately being in the employ of ABC. Because of his being a diarist documenting his experience, his observation skills, and his extensive experience with so many reporters, journalists, cameramen, sound men, and photographers, he is able to present a uniquely detailed, personal, and yet broad view of the Vietnam War. While not a soldier, he as the cameraman, with the sound man and the reporter, went everywhere the soldiers went. They took the same risks as the soldiers they were documenting, transported their own equipment and supplies to perform their jobs.

The editor of this memoir, Terry Irving, points out his impact was to “make Tony’s observations and comments clear and occasionally, figure out what he wanted to say.” Throughout the memoir it is the personal nature of the observations and feelings expressed that touch the reader and clearly differ from what the journalists did or might observe. This memoir of a cameraman of the Vietnam War and the film by Ken Burns and Lynn Novick (The Vietnam War) arrive at the same time for our perusal. This reviewer, who happens to remember the televised presentation of the war, has chosen to read this book and to follow with the film to better appreciate those involved in documenting that real-time history. On the Frontlines of the Television War is a wonderful memoir.