Number One Observatory Circle: The Home of the Vice President of the United States by Charles Denyer 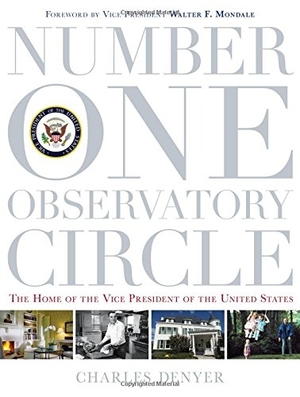 Have you ever thought about where the Vice President of the United States and his family resided? Charles Denyer has written the history behind finding a residence for the VP. Before the 1970s, Vice Presidents lived in their own homes near Washington D.C. or rented condos or apartments for their term in office. When Vice Presidents were given Secret Service agents for protection, it became abundantly clear to everyone that it was impossible to fully protect them in a tiny apartment or home as it infringed on their privacy in their homes. The home for the Vice President required enhanced security, a place befitting the second in command, and the ability to hold social gatherings. There was also a need to show power and influence of the person who could be called upon at any moment to resume the responsibility of the presidency.

Many homes were looked at near the Washington area but none seemed more ideal than the home of Naval Operations that sat very high on a hill. This home was not handed over without a fight. The committee assigned to find the right home had hearings before Congress with Hubert H. Humphrey making statements about Congress’s inability to procure a residence and statements from Admiral Zumwalt on his desire to keep his home. In the end, the official home of the Vice President of the United States is a sprawling 72-acre compound known as the US Naval Observatory in Northwest Washington, D.C. Walter Mondale became the first Vice President to live in the 1893 Queen Anne-style home with every Vice President since also residing there.

Number One Observatory Circle is a large hardcover, coffee-table book perfect for display. The book clocks in at 256 pages, and contains a large number of photographs. The pictures include interior shots of the home as well as with the people who lived there. Professional and private collections are included, giving a unique glimpse into the Vice Presidents and their family’s lives. Some images include the various VPs at work, as well as documentation of their chosen artwork and furnishings. Whatever your political leaning, this book is well worth taking a look at. This beautiful book is likely to appeal to people interested in American history, as well as to the architecture and design inclined.