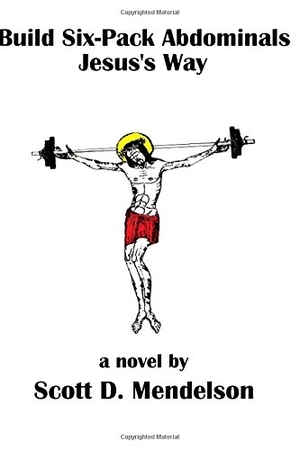 Abner Kincaid, a priest of dubious faith, is having a run of bad luck… a run that has lasted the majority of his life. Most recently his secretary ran off with the money gathered from the faithful to pay the rent on the church itself, as well as wiping out his own personal accounts! Faced with complete poverty, Abner remembers the land his father left him before he died – a fallow farmland with a dry well. Abner, together with his friend, Granger, begin a somewhat shady business at the old farmhouse – a gym membership of sorts with the religious spin of working the land “Jesus’s way.” Taking advantage of a former parishioner’s lucky windfall, Abner’s scheme is launched. Will Abner’s bad luck continue, or is this the beginning of real change?

At first glance, Build Six-Pack Abdominals Jesus’s Way is not terribly inspiring. Between the awkward title and the poor cover design, many potential readers are likely to give this book a pass. However, this is actually a surprisingly good read. Abner is a perfect example of an unlikable protagonist. He’s a crass, womanizing, alcoholic, and irreverent priest, but he’s also someone that lost his mother early, had a poor relationship with his father, and is still dealing with PTSD following his tour in Vietnam. As such, Abner is a remarkably real character that you want to see succeed in spite of himself.

While the book follows the events at The Lord’s Cross-Training Farm, it really shines as a character study. It’s not necessary to like characters in order to enjoy our time spent with them. We watch Abner struggle from rock bottom and re-evaluate past traumas through his experiences and the various people he meets, and this journey is more than enough to keep the pages turning. Don’t expect a happy ending out of this book, it isn’t that kind of story. However, this is a book that inspires the reader to re-evaluate their own decisions and life events and is worth the time spent reading.

This is a book that will likely struggle to find an audience due to the surface presentation. Its rather negative outlook on religion will also make it less appealing to the religious readers that may be initially drawn in by the title and basic religious theme. Readers with a dark sense of humor and people interested in characters will likely find Build Six-Pack Abdominals Jesus’s Way to be worth the read.