The Alice Network by Kate Quinn 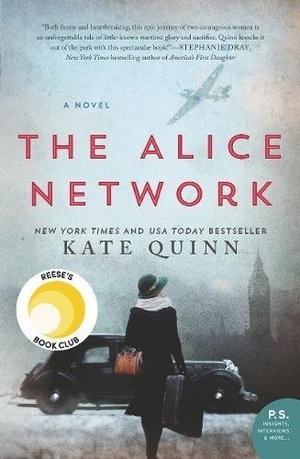 Two years after the end of World War II, pregnant, unmarried, American college student, Charlie St. Clair, embarks on a trip throughout Europe in search of her cousin, Rose. Though she hasn’t seen or heard from Rose in years, she believes one Englishwoman, Eve Gardiner, holds the key to finding her. She forms an unlikely alliance with Eve, who she soon discovers is an unhinged former war spy, and her handsome Scottish driver, Finn. The ensuing search unfolds amidst Eve’s retelling of her experience as a spy undercover in France during World War I. Eve’s stint posing as a waitress at a restaurant owned by a collaborator and profiteer serving the Germans, is relevant to the trio’s present journey in more ways than one.

Though Eve Gardiner did not actually exist, she is based on similar women who served as spies during World War I and II, often without recognition. Thus, her experiences maintain a degree of credibility and authenticity. Likewise, Charlie’s treatment as an unmarried pregnant woman mirrors the situation that many women found themselves in at the time. Both women and their experiences were well researched, with Quinn going the extra step to imbue them with vibrant three-dimensional personalities.

What begins as a slower paced narrative soon develops into a thrilling tale of espionage. Once readers are immersed in the characters and story, it becomes a page-turner. The format of alternating every chapter between the present day with Charlie, Eve, and Finn, and Eve’s past, keeps the action moving forward at a steady pace. While this style can occasionally be jarring as it forces readers to readjust from one narrator to another, it works well here. It enables both stories to develop harmoniously so that it is more satisfying when the stories eventually converge. With various possible outcomes, The Alice Network will keep readers invested and captivated until the end.