Caesar’s Last Breath: Decoding the Secrets of the Air Around Us by Sam Kean 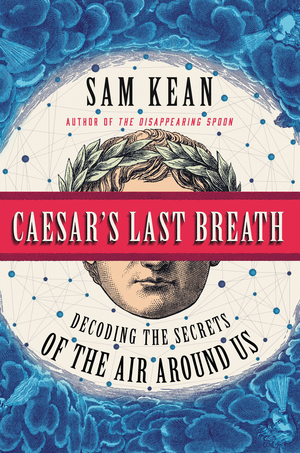 Most of us know there is oxygen and carbon dioxide in our air (atmosphere). Sam Kean makes a book about the makeup of the atmosphere interesting and entertaining. This book is actually about the atmosphere of the earth and the air we breathe. As a way of introduction to the concept of how significant, ubiquitous, and important it is, Sam Kean shows us that with each breath we take we likely inhale one particle of the volume of air in Julius Caesar’s last dying breath, and thousands of particles over the course of a day!

From here Mr. Kean proceeds to teach us about the atmospheres of our planet in the early evolution of the earth with the development of gases such as sulfur dioxide, hydrogen sulfide, carbon dioxide, nitrogen, and ammonia. The detail of these gases is provided by examining the earliest identifications by man and how they were produced, the number of particles of each in our air and the number we inhale with each breath. The book then moves forward to the makeup of essentially all the particles found in the air we breathe. Each of these particles are related to the history of discovery and the individuals involved, the impact on us both good and bad, as well as discussion and examination of how humanity has proceeded to alter the atmosphere. There is discussion of attempts at controlling or improving the atmosphere as well as the idea of possible survivable atmospheres on other planets. This is an interesting book that is easy to read and makes learning about the air we breathe accessible for the layman!