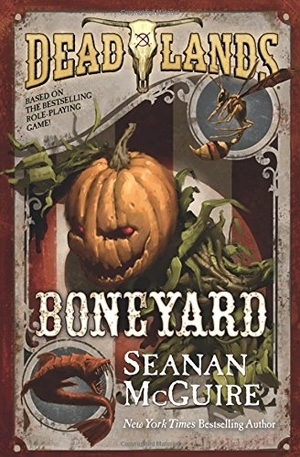 The Blackstone Family Circus has many attractions to bring joy, wonderment, and terror: Aerialists flying high over the hard ground; proud lions tamed by the will of man; the twin “Russian werewolves”; human freaks; the strange and deadly creatures of the oddities wagon.

The American West is not just wild, but weird and horrifying, and Annie Pearl has collected its monsters and cares for them in order to entertain others. It is a role her own daughter has prepared for her; a girl born from a monstrous man’s science, a girl who can drink poison and who lives quieter than a whisper. Annie will do anything to protect her daughter and to keep her from a past set to consume her, including following the circus to a small community in the Oregon wilderness with a suspicious reputation.

Boneyard, by Seann McGuire, is based on the roleplaying game Deadlands, which is set in an American West that blends horror, historical fiction, and steampunk genres. The novel predominantly follows Annie, but also takes on the viewpoints of Mr. Blackstone, a young man of the circus named Martin, and Annie’s estranged husband, among others. McGuire builds tension slowly, spending a good deal of the beginning introducing the readers to the folk of the circus. Once the circus reaches the settlement of The Clearing, the narrative quickly picks up pace as events force Annie into exploring the mysteries of The Clearing. Meanwhile, McGuire slowly reveals Annie’s past in cutaways back to her homeland.

McGuire’s characters make this book worth reading, with even the most archetypal characters having some complication. Even the monsters have personality, and readers may find themselves emotionally attached to the most horrifying of things. Annie can be a little passive at times in the middle of the book, as she becomes a stand-in for the reader, a stranger to The Clearing who can have all the mysteries explained to her, with a great deal of exposition and very little action on her part. Her emotional depth carries through these parts, though, and she retakes control of her own destiny by the end of the book.

Included in Boneyard are sporadic atmospheric illustrations by Steve Ellis, which are beautifully done, but which sometimes come before the events depicted, and so spoil certain plot twists, which can be very disappointing. A horror novel lives off its tension, after all, and knowing ahead of time whether certain characters are safe and sound takes away much of the fun. Still, the Deadlands setting is a wonderful, genre-blending playground, and McGuire’s story is easy to get lost in.