The Descent of Man by Grayson Perry 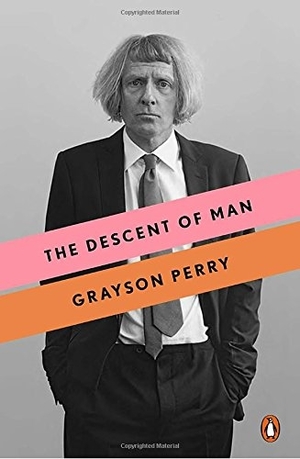 Once again, we may be on the cusp of another societal sea change. First, the civil rights act of 1964 officially ended segregation; in 2015, a great leap forward in LGBT rights was signaled by the marriage equality decision of the Supreme Court.

Grayson Perry, in The Descent of Man suggests that masculinity 1.0, may be changing in favor of a broader, more accepting style. Perhaps not actually metrosexual, but trending toward a merger with traditionally more feminine virtues. Tradition is the biggest reason why men have been stuck for so long to the detriment of society and themselves.

The first chapter is titled “Asking Fish About Water,” meaning that noticing the properties of your existence is not easy from the inside. Mr. Perry is British, an artist, an award-winning documentarian, and a transvestite. While giving a nod to our evolutionary history, he thinks that the psychological and physical tools inherited by men seem increasingly redundant e.g. hunting and fishing are no longer survival skills, but a means of identifying as masculine least there be any doubt.

To the author, masculinity, when embraced and wielded by individuals is a dual-edged sword. Those who ride it to the board room or to the top of their profession, leaving the wienies and the women in the dust, no doubt think it’s great to be male. For those in the middle, if their expectations of their maleness fall short, it can be devastating, resulting in self-image medicating with risky substances and the increasing suicide rate in these tough times for middle-aged white men. Women don’t seem to react as drastically, so perhaps there is something more resilient is a woman’s make up that men might look for.

Admittedly, the author had professional help with his transition into self-acceptance of his unusual circumstance, but he is obviously content and confident where and how he is. Perhaps if you’re struggling with masculinity issues, a read through this little book might ease your passage and, if not, might encourage your understanding and appreciation of those who are different, but not less.