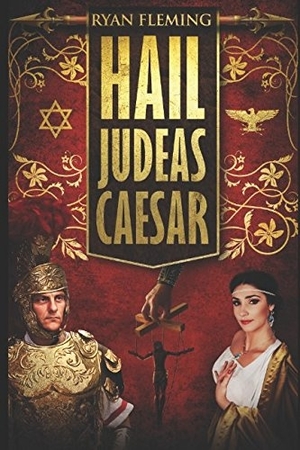 The tale of Jesus of Nazareth, his creation of Christianity out of the old Jewish faith, and his rise in popularity that led to his betrayal, and crucifixion by the Romans is a tale that has been told thousands of times over thousands of years. In Hail Judeas Caesar, Ryan Fleming crafts a retelling focused from the point of view of the Romans, revolving around Pontius Pilate and his struggle to bend the stubborn and strangely different Jews to Roman authority without having to resort to wiping them out entirely. While he could execute the Jews in mass, it wouldn’t benefit Rome to do so, as they would be lacking a population to help flush the coffers with taxed revenue. After some false starts, Pilate manages to get a spy into the Jewish council and begins an ambitious plan to manipulate the Jews through the very religion they are so devoted to. In the end they decide to create the messiah the people are so eagerly anticipating.

Looking at the story of Jesus from the point of view of him being a Roman creation rather than a literal son of God is a fascinating take. This also isn’t an idea based from pure imagination either. Fleming backs up his story in a section at the end of the book where he points out all of the inconsistencies in the Biblical chapters that cover the life of Jesus as well as how many of Jesus’s teachings aligned with long term Roman goals (paying taxes and submitting when oppressed being key). Looking at the story from this point of view, it is actually rather surprising how much it makes sense for Jesus to have been a Roman creation, a clever plot to manipulate a stubborn people through manipulating their own religion. One must consider how, by this time, the Roman empire was well-practiced with absorbing other cultures and religions into their own and had done so most obviously with their adoption of the Greek gods and goddesses.

While some strict religious readers are likely to find this idea offensive, the book does suggest an interesting theory. History is rarely black and white, and much of the truth of any historical event has been diluted and corrupted by the flow of time and the efforts of the people in power. This is why much of history has a glow of the mystical, the fantastical, and the mythological. All one has to do is take a look at any recent major news headline to see how many different versions exist – the different angles taken by various reporters based on their political or moral leaning often leads to very different perspectives and/or stories, not to mention the rumors that end up being spread rapid fire through social media.

The book itself is well-crafted, with characters that feel believable, if not jumping off the page. Hail Judeas Caesar is a relatively quick read, with a solid smattering of notes to follow up on in the end. Readers who have an open mind and those who enjoy theorizing possibilities are likely to enjoy this compelling historical fiction.