The Names of Dead Girls by Eric Rickstad 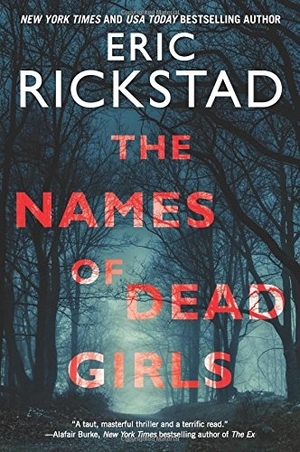 A savage killer convicted sixteen years ago and released for good behavior nine years early is back. Enter retired detective Frank Rath, the brother of Ned Preacher’s victim and the custodial uncle of infant Rachel, the only survivor of the attack. As the original detective, Frank is pulled out of retirement to head the attempt to put Preacher back in jail by almost any means in order to make sure Rachel is safe. It’s no help that Rachel is young, headstrong, and does not altogether cooperate with uncle’s plans.

Contemporaneously with Preacher’s reappearance in the community, young girls start dying. So, it’s open and shut, right? Preacher was also a suspect in the Connecticut River Valley Killings that stopped when Preacher was jailed.

This should be enough material for a good mystery thriller. Does one appear? It’s hard to tell because of the ever-present FOG! The fog and rain seem to be the main framework for the story: atmosphere, or manipulative device? Even though the story takes place on the Vermont/Canada border in December, I lean toward the latter.

The story is uneven, mainly because the protagonists all have their own weaknesses and privacy/trust issues that slow things down to a crawl. Only occasionally do they work together to gather the story elements and clues into an interesting narrative. However, when they do manage, it’s a good read.

The book is structured in five parts, ninety-three very short chapters and concludes with an author’s note that sheds some light on why the novel is written as it is. I think the author’s note would work better as a forward. Forewarned is forearmed.