Turn on the Heat by Erle Stanley Gardner 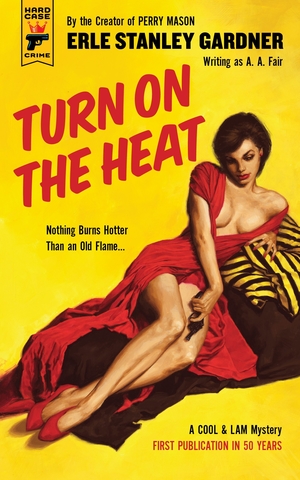 At the time of his death, in March of 1970, Erle Stanley Gardner was the bestselling American author of the 20th century. Most famous for his character Perry Mason, a sleuthing criminal defense lawyer that invented and defined a genre. Outside of Mason, Gardner’s other big creation was Cool and Lam; Bertha Cool is a detective and Donald Lam works for her. The series was written under the pen name A.A. Fair and is made up of thirty plus books featuring the pair.

Turn on the Heat, first published in 1940, is the second book in that series. Last year Hard Case Crime published the lost first Cool and Lam novel, 77 years after it was written, called The Knife Slipped. That book was rejected at the time it was written and Turn on the Heat is the book Gardner wrote to replace it.

The case opens as Don Lam is put on the trail of a woman, a Mrs. Lintig, who disappeared over 21 years before the book takes place. Lam travels to the fictional town of Oakview to track her down. Quickly after arriving he meets a woman who works at the local newspaper, Marian Dunton, and he gets sucked into the town, its politics, not too much before Ms. Lintig show back up, after her long hiatus, to wrench things up.

Gardner’s book is classic 1940s noir. It is not too hard boiled, but the dialogue is tight and terse, the action is interesting if at times confusing, and the book moves along well. There is quite a bit of good noir charm about this piece of writing, even if it is not Gardner’s best.

The end is somewhat predictable, but it is good fun getting there. Hard Case Crime always puts out good pulpy fiction and this is no exception. The book is a fun timepiece that will delight fans of the series, Erle Stanley Gardner, and classic crime fiction. The greatest thrill is seeing this award-winning writer getting his feet underneath him as he starts his long and illustrious career.