1916: One Hundred Years of Irish Independence: From the Easter Rising to the Present by Tim Pat Coogan 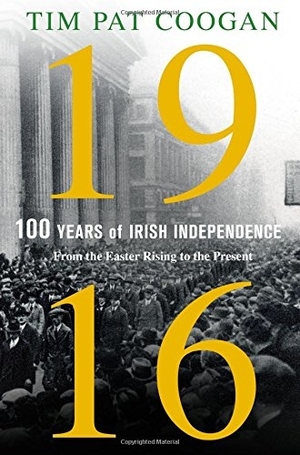 Coogan’s latest foray into Irish history commences on the eve of the 1916 Easter Rising. In subsequent chapters Coogan examines the implications of this event. Ireland fought for independence from England, but at what cost? Amid redefining the reborn Irish state, the country struggled with religious, economic, and political instability and corruption; issues that to this day remain relevant and unresolved to a degree.

1916 is a comprehensive yet concise study of this period in Irish history. Coogan brings a personal touch to the narrative since he was involved in many of the events either as a citizen or as a journalist. For example, Coogan speaks of his personal connection to a scandal involving a bishop’s affair and son with an American divorcee. His friend had been aware of the affair for some time, yet abstained from mentioning it until it was publicly acknowledged. Despite these personal connections, Coogan generally remains objective in relaying the facts. Though, he isn’t without judgment concerning some of the more scandalous or archaic occurrences, such as the use of symphysiotomy in the place of caesarean sections. Overall, Coogan skillfully maintains a balance between presenting the facts objectively and reflecting on them in a thoughtful and relevant manner.

Coogan provides a thought-provoking read that doesn’t attempt to glamorize events. Instead, he presents a realistic outlook. He addresses the underlying causes of issues plaguing modern Ireland, however, he withholds offering satisfying or flawless solutions because he recognizes that there are none. Having a basic understanding of Irish history is helpful though not necessary in examining and understanding Coogan’s text. Readers new to Irish history will receive more than the average breakdown of events leading up to the present. Readers already familiar with these events will revel in the analysis of the consequences, both positive and negative, that this period had on Ireland’s foundation for current and future generations.