Across the Blue by Carrie Turansky 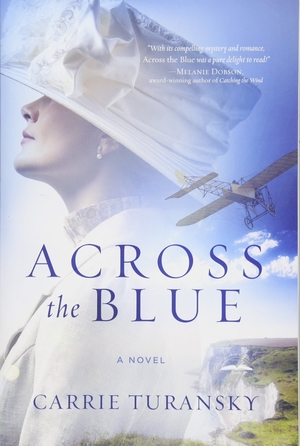 Across the Blue is a high-flying historical fiction set in Edwardian England during the beginning adventures of aviation. Isabella Grayson is the elder daughter of Mr. Grayson, a wealthy newspaper mogul in London. He and his wife have no royal bloodlines but hope for future connections through marriages by their daughters. Isabella has her own dreams. She hopes to become a journalist with one of her father’s newspapers and possibly marry a man of her own choosing, who may or may not be of royal class. She knows both of these ideas will not bode well with her mother. Mrs. Grayson finds her daughter’s pursuits of happiness totally unconventional! Upon their purchase of the new country home at Broadlands, Isabella finds her life changing when a young and daring, aspiring aviator crash lands right on their property. Mr. Grayson, who himself is intrigued with aviation, offers to help financially with repairs on the plane for James Drake. His newspaper is offering a reward for the first person to fly over the English Channel and he hopes it will be an Englishman! Isabella finds James handsome and exciting, but with no social standing. She also sends an article to the newspaper about aviation that is posted anonymously.

This story is written well and was exciting to read. The descriptions and details given about the home at Broadlands gave credit to the historical fiction part of the story as does the history of aviation. The historical restrictive roles as women were also clearly depicted though Mrs. Grayson’s lack of support for Isabella’s wishes or her dream of becoming a journalist. Isabella and James grew as characters throughout the story as strong and became enduring individuals. There were a few typos found while reading, however the copy read was an ARC, so I hope that they have been found and fixed for the final version. This reviewer feels this novel is good for romance enthusiasts and aviation fans alike! Across the Blue is faith-based with love, mystery, and adventure that combines to make a great story!