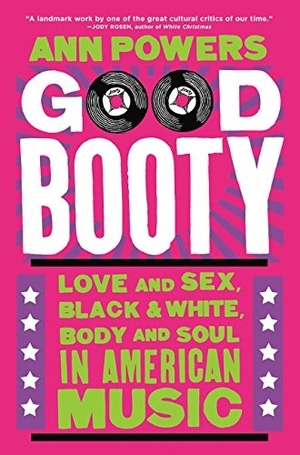 Ann Powers, the well-known popular music critic that many readers will know from NPR, brings her famous voice to print in Good Booty. The book is a history of American popular music, with particular concentration on the ways that popular music works as a nexus point for race relations and sexual relations throughout its history in America. Although there is one chapter dedicated to popular music prior to the 20th century, and particularly pop’s origins in slave music and performance, most of the text takes the growth and development of popular music in the 20thcentury, one decade at a time.

In each of these chapters she mentions enough really famous artists that readers who have average familiarity with popular music will recognize some names and songs, while artfully mixing those references with the names of less well-known artists to broaden the reader’s horizons. Each chapter sticks to the themes of love and sex, as well as race relations, which becomes especially important later in the book as the music becomes more plentiful. Ultimately though, even if you know very few of the songs or artists mentioned, you’ll be drawn to keep reading, because Ann Power’s writing is like talking to your really smart best friend. She looks at familiar information in ways that are new and novel and has extremely intelligent things to say about them that never make the reader feel dumb or alienated. The book is highly recommended for readers who are interesting in the history of music, the history of race relations, or even just the history of the 20th century.