Murder In The Manuscript Room by Con Lehane 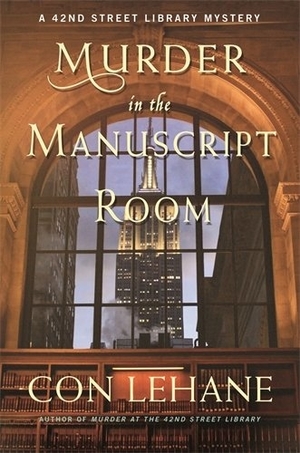 Raymond Ambler is a librarian at the 42nd Street Library in New York City. He is curating the soon to be completed exhibit “A Century-and-a-Half of Murder and Mystery in New York City.” His friend, Mike Cosgrove, a NYPD homicide detective introduces him to a former law officer and author who wishes to donate his papers to the library’s crime fiction section, which is Raymond’s interest and expertise. From this beginning we are introduced to the complexities that exist in the characters’ lives.

Raymond’s son John is serving time in prison. John has a son named Johnny who Raymond and Johnny’s grandmother share custody. Cosgrove has a troubled marriage and a daughter who babysits Johnny for Raymond. There are personnel at the library who interact with Raymond. When one of the co-workers is found murdered in the crime fiction section Raymond takes an interest and attempts to help his friend, Cosgrove. As the story unfolds and then progresses there is possible involvement of an old murder, a death/assassination in John’s prison, a kidnapping attempt, drug bust, and a shooting. There is travel through sections of New York City, several bars, and to Texas before the resolution of the murder in the library occurs.

The story presents multiple plots that emanate from immediate events and extend to one dating decades earlier. The frequent jumps from one to the other event is confusing because it is often incomplete, leaving the reader a bit lost. There are times when the information obtained by Ray or from his contacts seemingly provides direction or answers not obvious to the reader, only to Ray. The attributes of each character are crisp and succinct allowing the reader to flesh out the details. While having the lead character be a librarian is interesting, this book is a bit dull and a tedious read.