The Misfortune of Marion Palm by Emily Culliton 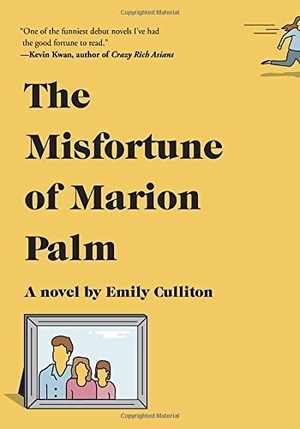 Marion Palm does the unthinkable and embezzles six figures from her daughters’ private school. Marion has no remorse, perhaps because she has been stealing her entire life, with no regret whatsoever. Marion is a difficult character to embrace. And yet, her clueless husband, Nathan, is even more difficult to like. Nathan is a struggling poet with a quickly-diminishing trust fund. When Marion disappears without a trace, Nathan does not worry but instead hides in the cocoon of his brownstone oblivious of his daughters Ginny and Jane. Ginny is a teenager looking for love and approval and Jane has attached herself to a missing boy that she has imaginary conversations with rather than deal with her mother’s disappearance.

Culliton has assembled a cast of characters that range from boring to bizarre. The school board of directors are inept and the Russian landlord Marion leaves the reader guessing what her real intentions might be. Initially, The Misfortune of Marion Palm provoked this reviewer’s interest but the overwhelming innocuous details bogged down this promising story. Characters were so flawed, the marriage so tattered, and the children so hungry that the reader will disconnect with them and lose sight of what Marion has truly done – disconnected from real life and destroyed the lives around her. Culliton is skilled at creating characters the reader will easily hate and this reviewer presumes that is quite clever because the reader will mull over this book long after completed.