Selfie: How We Became So Self-Obsessed and What It’s Doing To Us by Will Storr 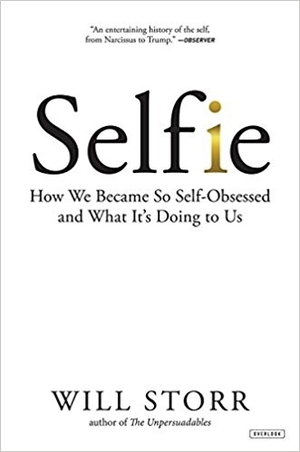 It would be easy to presume that Will Storr’s book is as cutesy as its title, Selfie: How We Became So Self-Obsessed and What It’s Doing to Us, but that would be a mistake. Storr, a renowned long-form journalist, takes the reader on a journey from Ancient Greece to today to explain how the age of perfectionism is a matter of life and death.

“People are suffering and dying under the torture of the fantasy self they’re failing to become” (Storr, 17).

Children of the 80s, 90s, and 2000s were told repeatedly that they could be whatever they wanted when they grew up as long as they tried hard enough. As adults, millennials have found reality to be very different from what their parents, teachers, and counselors drummed into them. Employees no longer stay at one company for decades, retiring with a comfortable pension. More and more people are freelancers with no employment stability or benefits. Instead of relying on a collective organism, whether a government or a corporation, employees absorb the expectation that they are individually responsible for keeping their skills up-to-date and finding opportunities to support themselves in this over-inflated economy largely reliant on personal debt. Instead of giving up on long-natured dreams, millennials double down and works even harder.

“If you’re prone to societal perfectionism, your self-esteem will be dangerously dependent on keeping the roles and responsibilities you believe you have” (Storr, 9).

Every day, the social media attacks worsen for celebrities and other famous people who make a mistake. Instead of expecting an apology, the public demands resignation and retribution if not all-out revenge. As a society, we have absorbed the message that we cannot afford to make any mistakes. A sense of failure becomes especially dangerous when it morphs into the belief of the inability to repair what’s gone wrong and the capacity to change. This results in the feeling of being stuck, which could lead to suicide.

“We tend to judge people who actually need help harshly – and judge ourselves harshly when we need it. We decide we’re failures. We’re losers in the game. And if we tend towards perfectionism, and are more sensitive to signals of failure in our environment, we risk the self becoming unstable, bringing thoughts of suicide and self-harm” (Storr, 259).

Storr discusses how we got here by examining our innate tribal natures, Ancient Greece, Christianity, Ayn Rand, how the Esalen Institute’s ideas influenced first hippies and then mainstream culture, the emphasis of self-esteem on school-age children beginning in the 1980s, Silicon Valley, and more. Each section is dense with extensive research. At times, he breaks the journalistic fourth wall. As a gen Xer, he reflects on how these invasive cultural believes have knowingly and unknowingly seduced him. While he puts forward a compelling argument about how the past has shaped our egocentric present, he has little to offer on where to go from here. As a result, Selfie is a chilling, realistic look at our modern economic, political, and social climate.