The Missing by C. L. Taylor 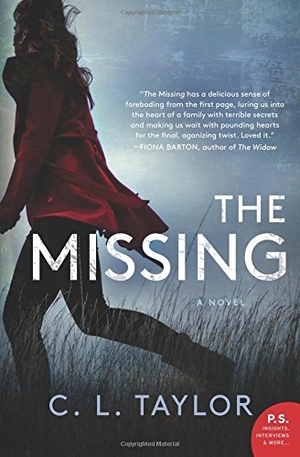 Six months after the disappearance of their son Billy in the middle of the night, parents Claire, Mark, and older son Jake Wilkinson are faced with another televised public appeal for information about Billy. Claire believes Billy has run away and is hiding because of a family argument. The only person who seems to understand her feelings and to whom she can express feelings and thoughts is her next-door neighbor Liz. With Mark working and Jake being nineteen-years-old and focused on lifting weights, work, the pub, and his girlfriend Kira, Claire feels she alone believes Billy is alive and continues to search for him. She constantly interacts with the police to see what is being done to find her son.

As the story progresses issues come to light involving almost every character casting suspicion in multiple directions. The resolution of Billy’s disappearance is made after multiple leads and dead ends. The story is told by two means. Beginning with the first page there are a series of internet communications between two individuals interspersed throughout the book; the identities only revealed at the end. The vast portion of this story is told in the first person by Claire. We see her feelings, her thoughts and follow her in the efforts to find her son. The story is constantly moving at a rapid pace keeping a sense of foreboding and concern constantly present. There are some jumps which initially are difficult to understand, which become clear later. For this reviewer it was a page turner read and was completed in two days as opposed to the usual week. The Missing is an enjoyable book, but somewhat disturbing.