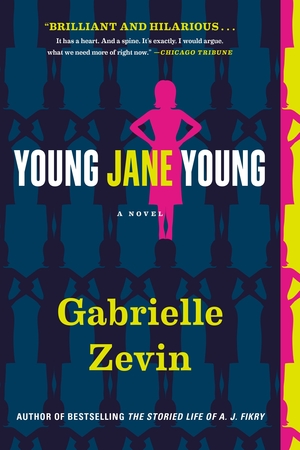 Aviva Grossman is young, naïve and ambitious. While interning, she stupidly has an affair with a married congressman. Even more stupid, Aviva writes a blog documenting the affair. When Aviva confides to her mom about the affair, she promises her mom she will end it, but doesn’t. A very public car crash reveals the affair and Aviva takes the fall for the indiscretion. She sinks to desperation and ends up moving from Florida to Maine where she begins a new life with a new name. She builds a successful business and raises her daughter peacefully until one day, her secret past is revealed.

Zevin writes with humor and spunk which makes Young Jane Young fun to read. Readers will cringe at each misstep that Aviva makes but from the safety of observer, it’s entertaining. Zevin is masterful at trickling out the details of what really happened to Aviva between the end of the affair and the hiatus in Maine. Aviva is confronted with how a singular stupid, impulsive action can wreak havoc with one’s life and ultimately change the outcome. Life is not fair, but there is a double standard for women and Aviva knows firsthand how to move on beyond the societal injustice.