Fight Like a Girl: The Truth Behind How Female Marines are Trained by Kate Germano with Kelly Kennedy 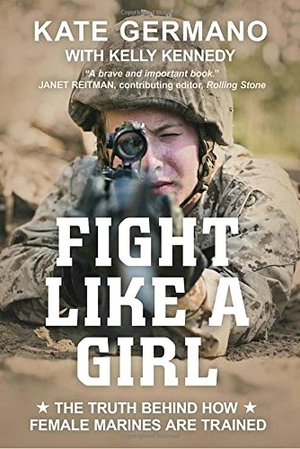 Marine Corps Lieutenant Colonel Kate Germano arrived at the Fourth Recruit Training Battalion at Parris Island in South Carolina, an all-female unit, determined to improve the women’s performance. When she succeeded, she was fired. She realized that the Marine Corps, the most elite branch of the US military and the only one that trains male and female recruits separately, didn’t want the women to succeed. From the beginning of their entry tests, women are held to a lower standard, which leads to underperformance, easily avoidable injuries, and failure.

The organization of Fight Like a Girl: The Truth Behind How Female Marines are Trained is relatively inexplicable. Many of the fifteen chapters open with a letter from one of LTC Germano’s fellow soldiers, who expressed their surprise and regret at her sudden departure. They set a loose thematic undertone for the focus on one aspect of the sexism in the Marine Corps: rape, “mean girl” mentality, shooting marks, etc. There are parables but no strong narrative pull or developed characters.

It’s an undeniably interesting and important story in today’s conversations about gender equality, but this book could have benefited from additional editing and revisions. Germano is angry at the explicit sexism, but the repetition grinds an ax at the reader rather than at the Marine Corps leadership.