Geminga: Sword of the Shining Path by Melvin Litton 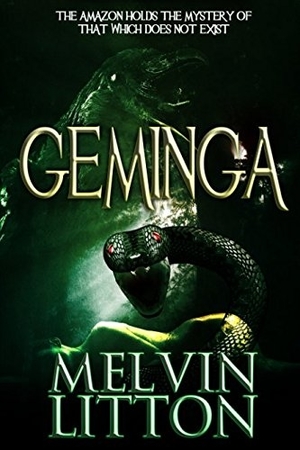 At the beginning of Geminga, Rodger finds himself in a bit of a predicament. He is hosting a pair of unlikely guests – a talking raven and a green snake named Jimmy – who he has just found out murdered his beloved cat. From this tense standoff emerges an unlikely friendship and Rodger and the raven begin to share stories over the series of several evenings and Rodger learns of The Center, Zalo’s great revolutionary plot, and the parts the raven and Jimmy played. The raven and Jimmy are fleeing Zalo, now considered to be loose ends, but is their respite with Rodger truly safe or has their past followed them across borders?

Melvin Litton’s Geminga: Sword of the Shining Path has all the hallmarks of good folklore: there are animals that speak, an obvious villain, and a musician turned carpenter who just happens to be in the right place. The book succeeds in grabbing your attention from the beginning and investing you in the raven’s story, though Rodger always remains a touch two-dimensional. Most writers will have heard of the saying “show, don’t tell,” as this makes for a much more involved narrative, allowing the reader to feel as if they are along for the adventure. While parts of Geminga follow this rule, the bulk of the narrative is told via the mechanics of the raven telling Rodger stories and vice versa. This has the effect of keeping the reader removed, but does work well with the folklore elements. In the end, whether or not the reader likes this style of writing will come down to personal preference and what they were expecting out of the story.

The strongest parts of the narrative are the bits that take place in the current day and include discussions between Rodger and the raven about the stories told. These discussions often delve into philosophy and the characters bantering over these subjects is enjoyable to watch unfold. Despite the bulk of the narrative having taken place in the past, there is just enough tension via the mysterious people who keep lurking around Rodger’s home and the dying wildlife to keep readers invested enough in the current events to keep flipping pages. Do note that this story is evocative of older folklore and fairy tales such as the original Cinderella whose stepsisters cut off parts of their feet to ensure the slipper fit, rather than the sanitized Disney version many are so accustomed to. Zalo is not a good man, and Jimmy and the raven are the results of science experiments rather than magic. All said, Geminga is a charming story, if a touch bizarre.