Hannibal’s Oath: The Life and Wars of Rome’s Greatest Enemy by John Prevas 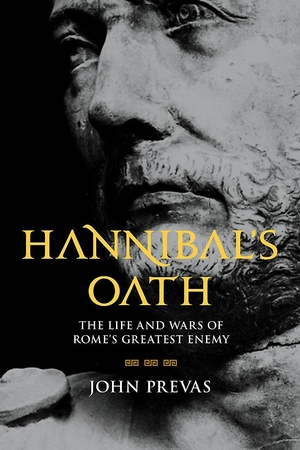 John Prevas, a leading contemporary authority on Hannibal, has set out in this book to evoke the figure of Hannibal for the average reader with an interest in history, and in this he is largely successful. He gives enough background on Hannibal that the average reader can move beyond “the guy with the elephants who crossed the Alps.” Prevas traces Hannibal’s path from his famous mountain crossing through his early victories against the Roman Empire, to the eventual decline and failure of his expedition. He talks clearly and in language the average reader can follow about not only what Hannibal did, but why he did it.

Prevas has also traced the footsteps of Hannibal in person, and occasionally uses the first person to help the reader understand what historians think, and why he might agree or disagree. That said, unless the reader is very interested in the story of Hannibal, it does tend to drag after a bit. Readers that are more deeply interested in the subject, will, however, find that this is a history that gives adequate detail to really appreciate the stories, while still being approachable for a more general audience.