Ignorance: Everything You Need to Know about Not Knowing by Robert Graef 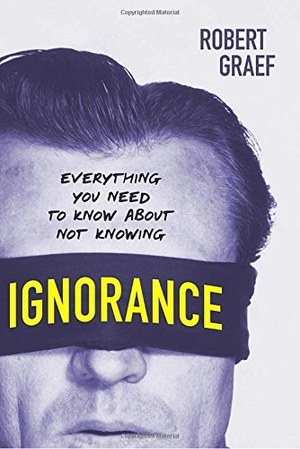 Ignorance gets off to a shaky start for two reasons. The first is that at the outset, the author says that he is a heavy user of metaphors. His reasoning is “Metaphors open up ideas, while descriptors limit them.” The second reason is that he spent some years as a physics teacher. As you may know, one of this reviewer’s favorite jokes/sayings is: “Physics has reached such an ephemeral level that it is no longer possible to tell when a physicist is joking!” While Ignorance is not a bad read, some of the opening definitions are fairly challenging.

To begin with, he defines ignorance in such a way that all we can know is such a small part of the whole that Einstein would quality as a dummy with blinders on. Fortunately, he goes beyond this fairly quickly and enters more familiar territory.

The author points out that ignorance can be passive or aggressive. Passive is when you and I are lazy and don’t seek knowledge about, or the truth of something presented for our consideration. Aggressive ignorance comes from the author’s invention, the ignorer: A person or entity (think Uncle Frank, a corporation, or government) that purposely withholds or distorts information we could use to gain useful knowledge. Both realms are fully explored and explained.

In fifteen chapters, Mr. Graef explores the many kinds of ignorance and its various guises, from out and out propaganda to partisan news sources that ‘spin’ their news. Anti-intellectualism and a declining educational system amplifies the harms ignorance does. Finally, chapter fifteen is titled working from and with ignorance.

Ignorance is a read for our time. With the political hijinks in full cry, it’s very important that we do our best to detect the ignorers and minimize our acquiescence to suspicious offerings: The recent Facebook fracas comes to mind as do the one-sided presentations of Fox News or MSNBC.

As the author says: All of us are ignorant to a degree (except the aforementioned Uncle Frank) but Ignorance, the book, helps us to be aware and minimize our contributions to error.