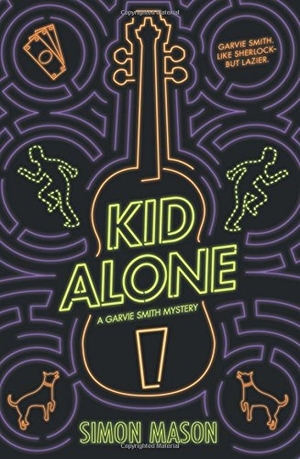 Simon Mason’s sequel to the Running Girl, Kid Alone, features Garvie Smith, a high school student who has a high I.Q. and photographic memory, but is easily uninterested, bored, and lazy when it comes to school. In the sequel, Garvie is caught up in another mystery, a boy from his school, Pyotor, has been murdered, having been the second student killed within a two-month period. While Garvie should be focusing on studying for exams, he is entirely focused on the investigation as well as the missing violin that Pyotor always carried. The detectives on the case are determined to keep Garvie away from the investigation, however, the deeper Garvie investigates, the more secrets he uncovers and the danger in turn amplifies.

This story is told through the third person point of view, mainly featuring Garvie Smith, a protagonist in the story. However, multiple characters are allowed separate chapters for further development, including chapters told from Detective Singh. Each separate chapter builds on character development and showcases the character’s peculiarities and characteristics. An interesting addition to the narrative were chapters that featured interview transcripts, which added more realism to the story as well as a better sense of the interrogation and pinpointing clues or lies in testimonies.

The dynamic between Garvie and his friends is an important aspect to the novel. Garvie’s friends, Smudge and Felix, often help him search crime scenes and are known for helping him to break in to places to find clues. They provide a support system outside of Garvie’s family. While his mother might not always understand him, his friends are there to help with the case. Garvie becomes torn between not upsetting his mother, who wants him to pass his exams, and his deep interest and need to solve the case.

There are some very suspenseful moments as well as fast-paced sequences of investigation and interrogation. However, if the reader has not read the first novel in the series, it may take some additional time understanding how Garvie perceives events and understands clues. Once you spend some time with Garvie’s unique perspective, his thought process will flow more smoothly for readers. While there are parts of the novel that are slow in pacing, once more clues are presented in the mystery and the investigation advances, the story becomes fast-paced with suspense and danger.

Kid Alone is recommended for fans of mysteries and people who enjoy suspense, diverse characters, red herrings, and dangerous twists.