Stop the Press: How the Mormon Church Tried to Silence the Salt Lake Tribune by James W. Ure 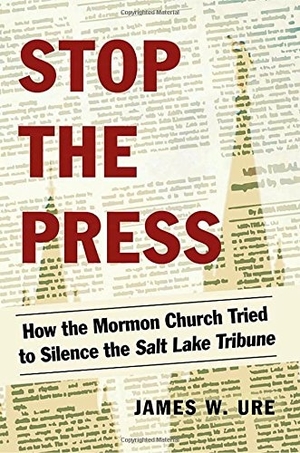 While this is a book reporting and exposing the effort on the part of the Mormon Church to “destroy” The Salt Lake Tribune, Utah’s largest newspaper, it is more. Being “more” is especially true for those individuals who know nothing or have read little about the history of the Mormon Church. After the first chapter presents the problem and dilemmas faced in Utah by “the Great Divide,” the next 14 chapters provide a review of Joseph Smith, his creation of the church, its migrations from New York, Ohio, Missouri, and on to Utah secondary to its trials and tribulations. From here Mr. Ure, a Mormon and a former journalist for The Salt Lake Tribune, recounts the history of the paper. The Salt Lake Tribune was first published in 1870, with the publishers, also Mormon, who felt there should be an alternative to the newspaper (Desert News) published by the Church of Latter-Day Saints.

Beginning in 2000 a concerted effort by the Church was undertaken to eliminate The Tribune because of its revisiting of the Mountain Meadow Massacre, one of the worst events in the Church’s history. These efforts nearly resulted in the end of The Tribune until 2016 when Paul Huntsman stepped in to become an owner/publisher and stated “I also believe in the independence of church and state and press.” It is apparent that Mr. Ure has done significant research on the history of the church as well as the long history of the battle between the two newspapers, with his extensive notes, interviews, and bibliography. While the first chapters are a summation of the Church history, recognizing and acknowledging that history is important to understanding its attempts at silencing The Salt Lake Tribune. This is an excellent example of the importance of our guarantee in our Constitution of the separation of church and state.