The Foundry: Dianis, A World In Turmoil by Frank Dravis 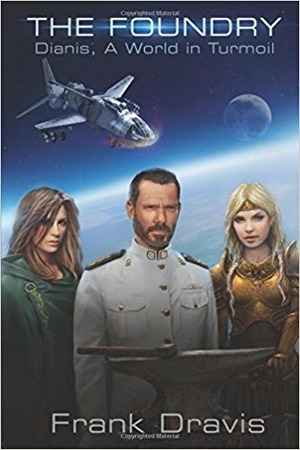 Achelous, Chief Inspector at the Interspecies Development Branch, has a tough decision to make. His superiors have been ordered to cease operations on Dianis, a Class E level planet, and to shift their focus elsewhere. The timing of the order is suspicious, coming shortly after recent reports of the discovery of aquamarine, a rare, precious metal, as well as those of developing psychics on the planet. Suspecting underhanded and corrupt motives from government officials in order to help bolster the war effort, Achelous has to decide if he’s going to follow orders and relocate after decades of work, or if he could find a way to stay behind on Dianis with his secret lover and their son. Life on Dianis isn’t going to be easy as the Paleowrights, religious fanatics obsessed with aquamarine – long considered to be minerals precious to the ancients – have learned of the recent discovery of an aquamarine producing mine in Wedgewood and are determined to acquire the mine in any way possible. With his family and the people he’s grown to love in danger from local planet-side forces as well as a much more advanced and ruthless mining company gunning for the resources on Dianis, Achelous has little time. Can he rally what allies he can before greed destroys everything or will Achelous’s plans only serve to make things worse?

The Foundry is an odd hybrid of science fiction and fantasy. The world building is complex and dual layered, with the science fiction of the advanced cultures that are involved in their own remote clash, and the fantasy and historical fiction elements found on the planet Dianis. Dianis is a flash to the past, with cultures reminiscent of those found on Earth in the 14th century. Members from the IDB work on studying the cultures and planet itself while endeavoring to protect it from predatory advanced cultures. Achelous and his fellow IDB field agents insert themselves into the cultures for better recon, and thus begins their conflict between what their job tells them they should do, and what they believe to be right.

Characters in the novel are diverse and lively with even the flatter side characters and villains being given enough detail to be believable in their motivations. It’s easy to feel attached to the split loyalties that the IDB members develop due to the feelings that arise after spending so much time among the locals and studying their culture. The book sets up plenty of ways for them to feel divided, and many of these plot points tie together with others and end up teasing potential future conflicts for later in the series.

Despite its length, The Foundry moves quickly and is a highly engaging read sure to be enjoyed by science fiction and more casual readers alike. While the book does contain some odd formatting and a few typos, the sweeping narrative and high stakes will keep most readers deeply immersed until the last page and left wondering what will happen next.