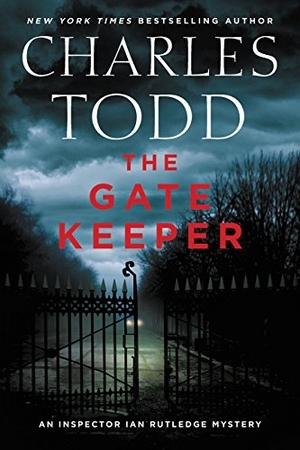 Ian Rutledge, still suffering shell shock from the Great War and still hearing inner voices from a dead soldier of that war, is barely able to hold his life together. He just gave his sister, Frances, away at her wedding and can’t sleep. He decides to get into his motorcar and sets off driving, taking him onto unfamiliar country roads. On this drive he has been trying to keep Hamish, the dead soldier, and all the memories that come with him and the Great War away. Almost falling asleep, he is stunned awake by headlamps in the middle of the road and he gets out of his motorcar to access the situation before him. Standing before him in the middle of the road is a young woman in an evening dress, standing by a man lying dead on the road. The woman has blood on her hands and looks to be in shock. The woman tells him in a shaky voice that she did not kill the man, who is her friend. She then says that a stranger was standing in the road who spoke to her friend, Stephen Wentworth, and then shot him and disappeared. Then she was left alone until Rutledge drove towards them. Ian Rutledge decides, although he is a witness at the scene, that he will take this case. Hoping the case will keep Hamish out of his head, Rutledge forges on.

Number 20 in this mystery series is impressive for the mother and son writing team that composes Charles Todd. It is a novel that is rich in historical story telling. Rutledge is a deeply troubled, unforgettable soul that continues to move forward as he “speaks for the dead” with each new case. He is a hero that fans respect and admire. Midway through the story it dragged a bit, maybe to increase suspense? This reviewer has read three stories in the series, but feels The Gate Keeper is good stand-alone mystery, although title doesn’t necessarily fit this story. Fans of this ongoing series will continue to enjoy the journey as the character of Ian Rutledge struggles on.