Tracks Along the Left Coast by Andrew Schelling 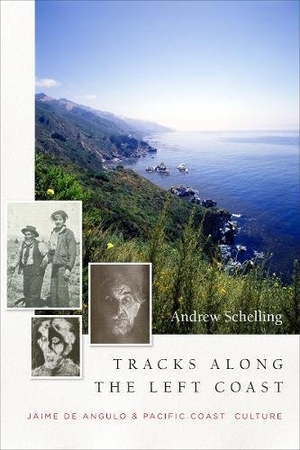 Jaime de Angulo, born in Spain and raised in France, became a legend in California, particularly around the Big Sur as a self-trained linguist and ethnologist, a novelist, and a poet. He traveled around California learning native languages and stories and even studied Chinese from immigrants in San Francisco. He also analyzed dreams and psychology under Carl Jung’s tutelage.
While Andrew Schelling’s research is apparent – no work could be so detailed otherwise – the goal behind Tracks Along the Left Coast isn’t necessarily clear to readers. At both ends of the book, Schelling asserts that this isn’t a biography.

In the preface, Schelling warns, “This book won’t exactly be a biography” (xxi). He’s even more direct in the acknowledgments and bibliography section: “This book is not a biography” (277). He insists that Jaime de Angulo’s daughter Gui, from whom Schelling takes a lot of information, wrote his biography, The Old Coyote of Big Sur. Schelling himself explains what he would call this book:

“This book is an attempt to discern what’s unique about the literature of America’s Left Coast, a place where the greater bioregions are distinct, complex, and continue to generate a lot of good literature” (Schelling, xxii).

However, a quick search for online reviews indicates that most (if not all) readers think of Tracks Along the Left Coast as a biography of Jaime de Angulo. People often have more than one biographer, and this book does cover de Angulo’s life from his birth, through childhood, his two marriages, and his work. In addition to The Old Coyote of Big Sur, Schelling has done ample research and analysis. He includes contradictory stories, which underscore the enigma that was Jaime de Angulo.

For those looking for an intensive focus on the culture and stories told by the Native Americans of California, this book provides little, although it does discuss Indian Tales, a book Jaime de Angulo wrote and which Andrew Schelling has dog-eared. This book is largely for other Jaime de Angulo aficionados.