Wendell and the Dragon’s Heart by Michael Rains 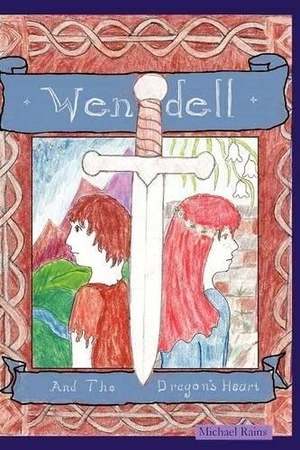 Wendell is an orphan living on the streets and trying to keep himself and his friends fed to the best of their ability when a chance discovery of a portrait of the king’s daughter, Karen. Something about the fiery red-head’s image struck a chord so deeply that Wendell’s life is changed forever. At first despairing of meeting the object of his affection due to the social class disparity, Wendell sees his opportunity to become something more, and potentially win Karen’s favor, once news of her kidnapping reaches him. Spirited away to an impossible labyrinth, Wendell has many trials ahead of him to rescue the princess, from gaining an audience to the king, solving riddles, thwarting an army of the risen dead, and a fight with a forgotten evil.

Michael Rains’s Wendell and the Dragon’s Heart is a high fantasy for younger readers that is similar to classic fantasy quests along the vein of Sir Gawain and the Green Knight. The book falls into a weird in-between area when it comes to intended audience, as it fluctuates between middle grade due to its simplicity, but seems to want to be aimed at the young adult readers. As the book echoes older fantasy tales, it relies heavily on the trope of the damsel in distress as kidnapped princesses are the primary motivator for the character’s actions. The female characters are few and far between – again, a common trope for the older style fantasy tales – and are largely useless on their own. These aspects are why the book may not ring true to many young adult readers who are of the age where they like to see heroes that resemble themselves, and since the vast majority of people who buy and read books are still women, these tropes may pose some issue with finding an audience. However, there is certainly still a place for tales with more archaic plots and the story’s message does actually run a bit deeper than readers may at first suspect.

Characters other than Wendell remain largely stereotypes and simplified caricatures, which does actually serve this type of story rather well. The plot is comfortably familiar, particularly for those who have seen The Labyrinth or grew up reading old fairy tales about knights and princesses. Sometimes Wendell is less an agent of his own fate and more an observer as things happen around him, and not to him. There are a few rough patches in the narrative that an editor could help clean up, and a slightly more consistent interior design would help guide readers between flashbacks and current events. There isn’t anything that makes the book truly stand out from the crowd, but the book is a light and enjoyable read for people looking for something to pass the time, or maybe a book they could read out loud as a bedtime story to younger children.