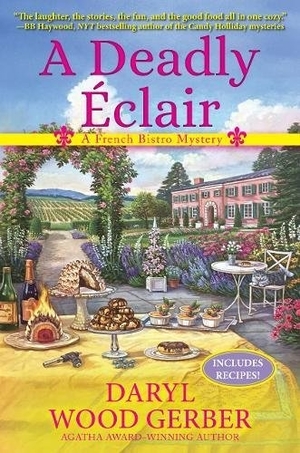 Mimi Rousseau was so excited to open her new Bistro Rousseau Restaurant and Inn in Napa Valley. She is a talented chief and a very creative person. Moving back home proved to be the best idea yet because after her husband died, she found out he had heavy debt. Mimi would never have realized her dream if her best friend had not introduced her to Bryan Baker, a local entrepreneur in his early sixties. He became her benefactor and mentor as she worked to renovate both places. His friendship moved her forward and now she was going to host her first wedding and reception with out of town guests staying at her Inn. But when Bryan’s body is found on her premises, his mouth stuffed with an eclair that she had made earlier, her old friend Sgt. Tyson Daly takes the case. Suddenly Mimi finds herself desperately trying to clear her name and also playing detective before the killer can strike again!

This cozy is the debut novel in the new French Bistro mystery series. It stars Mimi Rousseau as a strong, intelligent, and savvy young woman in this well plotted mystery. There is a close-knit group of other characters in the story and they traverse with Mimi as she talks around some culinary delights. The book includes 15 delightful recipes that were talked about in the story. There is a lot of humor with a bit of romance. It takes place in a beautiful setting and a bit of history is included also. The story is fast paced with many twists and turns. Fans can sit back with a nice glass of wine and read a delightful cozy in no time!