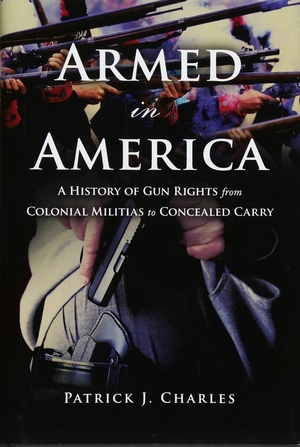 In 2013, the latest year for firm statistics, over 33,000 deaths were related to firearms and indications are they increase after that. How did we get into this position, unrivalled in any other developed country? There are certainly over 200 million firearms in America and we use them with wild abandon, excepting the “responsible” gun owners, of course. Again: Why?

Armed in America is an academic tour de force. It’s an imposing tome; thick with small print. For all of that, it’s an easy and interesting read, aided by the fact that there are two hundred and twenty-two pages of footnotes and a fourteen-page index.

This is where we are:

“A well-regulated Militia, being necessary to the security of a Free State, the right of the people to keep and bear Arms, shall not be infringed.”

We start with article seven of the 1689 English Declaration of rights which was a reaction when King James ll disarmed some Protestant officials while allowing the arming of some Catholic officials. This alarmed the Parliament which responded by calling for the inhabitants to provide themselves with arms in ‘accordance with the militia laws’. Subsequently, militia laws migrated to the new country and were argued and adopted by various levels of government throughout the states, culminating in the national Militia Act of 1792.

As for personal carry of firearms, it was discouraged when in a ‘civilized place.’ The presence of law enforcement and churches and stuff would obviate the need for preparatory armed carry by citizens engaged in lawful pursuits. This changed in 2007 when the Supreme Court decision: District of Columbia vs. Heller tipped the scales conclusively to the side of personal carry. The takeaway from all this is that TIMES CHANGE. Armed in America traces the twists and turns of language, laws, regulations and attitudes concerning firearms from 1320 to 2018, using “Accepted historical methodology and objective norms.”

As previously mentioned, there are 222 pages of footnotes, each of which can be checked so this reviewer is comfortable with the accuracy and completeness of the subject matter. And it’s illustrated with period specific posters and publications; a good visual representation of the text.

This is a five-star book that is only going to get four. The reason for this is that with all the work that went into it, it’s not a knockout punch that will settle the matter: militia vs personal carry or, really, provide any solution to the gun carnage in America. To help with that, I would like to also recommend Rampage Nation by Luis Klarevas PhD. While Arms in America shows how we got to where we are, Rampage Nation provides information needed to develop strategies going forward. I am writing this review in the aftermath of the latest carnage in in a Texas school with ten dead. Somewhere in these books there’s an answer if we can find the will.