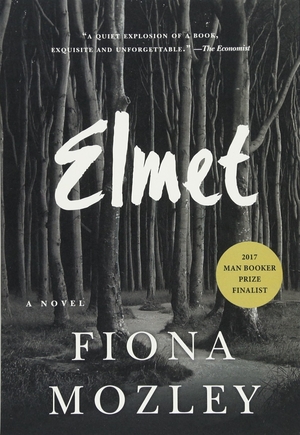 As one might imagine about a 2017 Man Booker Prize finalist, Fiona Mozley’s debut novel Elmet is well crafted. The title, as explained in an epigraph by Ted Hughes, Elmet was the last independent Celtic kingdom in England and into the seventeenth century was a hideout for fugitives. The first-person narrator, a teenage boy named Daniel, lives off the land with his older sister and their father, a gargantuan fighter with a perfect record. Although the land once belonged to their long-gone mother, she sold it to a man who threatens their continued existence in a battle between classes. There are the poor who earn their survival through physical work, the rich who exploit them, and the educated who forge a different path.

“We all grow into our coffins, Danny. And I saw myself growing into mine” (273).

Through a guileless teen brother’s perspective, the author captures each character’s strength and vulnerability. There’s a lot of social commentary with such nuance and complexity that anything written here is a reduction. This is a gem for anyone who enjoys Cormac McCarthy or Marilynne Robinson.