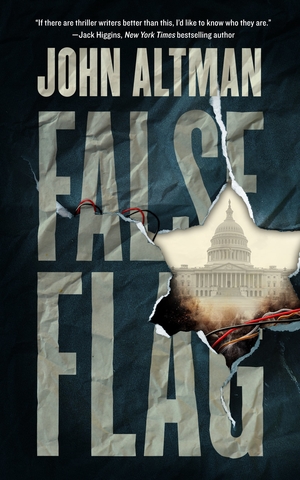 As the title hints, the chief of the Mossad turns rogue and has hatched a plan for an attack in the United States of sufficient gravity to surely provoke a war on the perpetrator. As the title further hints, Israel will not be blamed.

The main characters are both strong women. The strength is innate with both, but one just has an evil determination and the talents to bring the plan to fruition while the other is a canny older academic military expert with a son held by the Palestinians who she might see again if everything goes right. The pawn/weapon is an American Jew, a soldier in Iraq who lost part of his left leg to an IED explosion. PTSD leads to a troubled marriage, divorce, and a bitterness deep enough to leave his son and sacrifice his life to get even for whatever slights his mental state calls up.

Kind of on the other side, the story tells a narrative of the Israeli’s deep sense of persecution, both recent and historical, and the resultant aggressive defensiveness of Jews in general and Israelis in particular. This part made me stop to reflect on my own attitudes. Not anti-Semitic, but realizing that only having two hundred and fifty or so years of history have left my tribal sense weak by comparison.

This is an interesting and complicated book that would be well served by a second reading. There are many characters with different allegiances that are a little hard to keep straight, but each adds their part. The final analysis is that with all of its complexity, the book still adds up to a good old fashioned who-gets-there-first novel.