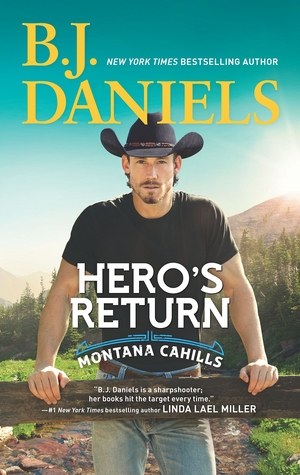 The Cahill family saga continues with this latest novel, Hero’s Return. Tucker Cahill had quietly disappeared from friends and family when he was in his late teens, 19 years ago. He had tried to bury his conflicted years, however when news surfaced about a young woman’s bones found on the family ranch, Tucker felt it was time to come and confess his past to his brother, Flint, the sheriff of guilt Edge, Montana. Feeling a bit relieved to face his brother, he tried to reacquaint himself to his hometown that same day but was disturbed by a surprise package that turned up for him at the sheriff’s office. Now he wonders if someone is watching him and if he should worry about losing his freedom here to his demons of the past. Kate Rothschild drives into town with a journalist’s curiosity about the woman’s bones newly discovered and with a vengeance against Tucker Cahill, a man she has never met. When they do meet, she finds Tucker attractive but unappealing because of his tortured past. As the two of them wrestle with their private thoughts, they share information that leads them astray of the law. As they get caught up in past history, Kate and Tucker find themselves in some horrific danger as they search for answers. The past continues to haunt them as they search the woman’s bones.

This is the fifth story in the Cahill Ranch series. This novel is a romantic western story filled with suspense and mystery. It is a fast-moving tale of adventure. it is also a quick read as there are many twists and turns as the story evolves. The western town of Guilt Edge comes alive with excitement in each Cahill adventure, although it thrives today as a ghost town in Montana. This can be a standalone story, but fans will love how the Cahill family members continue to move forward in their own lives in each novel and all of the character growth rings true. This book became more of a mystery novel with the romance part as more of a side offering. Fans of the Cahill Family will continue to love the series!