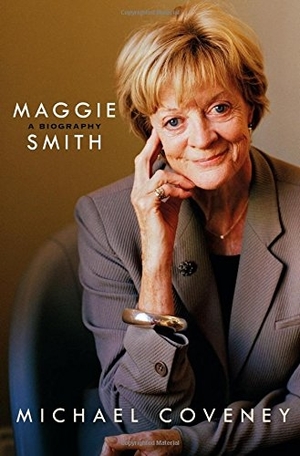 To younger American viewers, Dame Maggie Smith is perhaps best known for her roles as severe yet endearing Professor McGonagall from the Harry Potter film series and Violet Crawley in Downtown Abbey. However, prior to, and following those films, she has had a wealth of experience acting on stage and on camera. Coveney examines Smith’s life and work in depth, highlighting her personality both on and off camera.

The biography is well-written and contains an abundance of information on Smith and her varying roles. At times it’s a bit wordy requiring a more active reader. While other celebrity biographies can be superficial, and tonally lighter, this is a more serious study of Smith’s career as an artform. The biography excels most when detailing personal anecdotes revealing Smith’s surprisingly acerbic yet delightful sense of humor. Though, it could have benefitted from an interview with Smith, especially considering that it was written with her permission. For example, in the section on Smith’s acting in the Harry Potter films, Coveney describes each film in detail, and occasionally references Smith’s acting technique. The majority of readers don’t need a synopsis of the films. A description of what it was like for her personally, filming such an iconic character in a beloved series would have been preferable.

The biography is well-written to a fault. It feels less conversational, which is where biographies typically excel because they make readers feel like they’re getting to know the subject on a personal level. Tone and language occasionally distance the readers. Excessive verbose and superfluous details weigh down the story. The language isn’t an issue for readers willing to invest the time and effort; It’s best read one chapter at a time. This is the biography for a study of theatre and film in regards to Smith, however for those wishing to learn more about her on a personal level this is not the book for you.