Meet Me in The Strange by Leander Watts 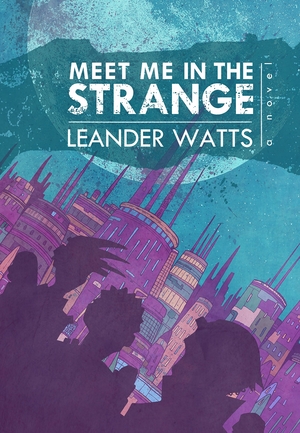 Davi is a teenager who spends most of his days in his family’s hotel listening to music. He has no particular ambition or purpose in life. Things change when he sees a girl at a concert of his favorite singer, Django Conn (in the vein of a more mystical Ziggy Stardust). Davi is immediately drawn to this girl and is surprised when he sees her again in the hotel. Determined to make a connection, Davi goes looking for her; he not only finds her but her intense and dangerous brother as well. As Davi is drawn more into Anna Z’s world, he finds more hope and more danger than he’d ever imagined.

Meet Me in the Strange by Leander Watts is a fascinating book that blends music and mysticism to create an atmosphere both foreboding and full of possibilities all at once. The atmosphere created throughout the novel, both in the Angelo hotel and the city itself, is exciting and lively but with a dark undertone that feels present and almost tangible. The storyline follows the two teenagers while they elevate Django’s music to a spiritual level and find themselves changed by doing so. The book doesn’t try to determine if what they experience is real; it just accepts it as their experience. The characters of Davi and Anna Z are both well-written who are both oddballs and different than others. They both have nice character arcs as the story goes on. Meet Me in the Strange is an unusual novel that is impossible to put down and stays with the reader well after it’s finished.