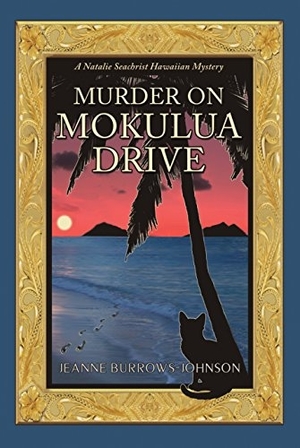 Waking from visions of an unfamiliar escape by boat from Denmark, journalist Natalie Seachrist tries to focus on her pending move. Still processing the murder of her great-niece and the death of her Aunt, Natalie looks forward to her move into her Aunt’s old house with her boyfriend, former detective Keoni Hewitt. Her new home, filled with fond memories from her past, is given new life from her blossoming friendships with her new neighbors Miriam, Joanne, Izzy and Samantha while strengthening her bonds with old friends and family. But her new, yet familiar home, is soon shaken by an intense vision of a murder and the horrible similarities those visions have to the murder that occurs next door.

Murder on Mokulua Drive, by Jeanne Burrows-Johnson, is a novel steeped in beautiful details. Both setting and character are wonderfully and intricately described, building a slice of life that draws the reader in and connects them to the story and its characters. While some readers may find that the early pace of the story seems slow, those who can appreciate the authors attempt to connect the reader to the characters will find themselves much more heavily impacted by events of the story as they unfold. And the attention the author pays to the Hawaiian locations is especially meaningful to those who have visited or lived on O’ahu.

While there is a small element of fantasy incorporated into the story through the protagonists’ visions, the author does a wonderful job of balancing it for those who are more pragmatic about their choice of mystery novels. The visions give context and background, helping to build the connections mentioned earlier, while still giving clues to murders and mysteries. Murder on Mokulua Drive is an engaging and enjoyable read for those who love deeply built connections and rich details. A worthwhile read, even for those who may enjoy a slightly faster paced and higher energy murder mystery.