Dunkirk: The History Behind the Major Motion Picture by Joshua Levine 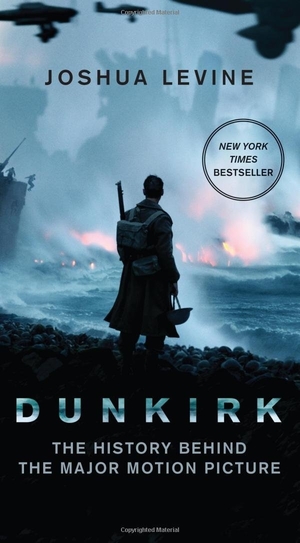 Christopher Nolan’s film Dunkirk, released in 2017, follows allied troops during World War II as they retreat to the beaches of coastal French city, Dunkirk. In the panic that ensued, Allied troops were slowly evacuated from the beaches, though transportation was limited. Levine recounts the true story behind the event. Beginning with an informative interview with Nolan, Levine then delves into the politics of the period. While the film focuses on a limited period of time, Levine delineates the history leading up to the Battle of Dunkirk. Thus, he lends a comprehensive study of a battle, that until a year ago, was largely overlooked and forgotten.

Though chapters follow an overall chronological order, culminating in the evacuation or “Operation Dynamo,” they’re not beholden to this structure. Levine focuses more on telling the story of Dunkirk rather than simply listing facts and dates. These details lend validity to Levine’s narrative without weighing it down. Personal anecdotes enmeshed throughout the book make the stories feel relevant. It’s not a war story, but a story about individuals struggling to survive. Like his filmmaker counterpart, Levine gives readers a feel for what it was like to be there, in the moment.

Dunkirk is the ideal companion to the film. It will satisfy those wishing to know more about the events preceding and following the battle of Dunkirk. While viewers of the movie are more likely to be drawn to this book, viewing the movie is not necessary to understand or enjoy the book. Levine delves into the movie making process briefly at the beginning and end of the book, however this is not a focus of the majority of the book. With or without the movie, readers will be engrossed in the history of this defining battle.