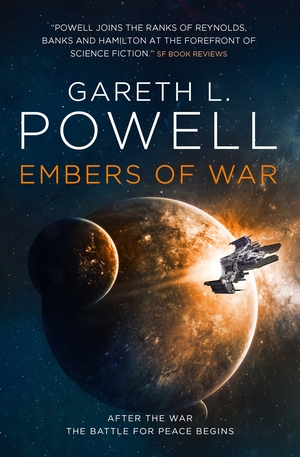 Trouble Dog is a sentient decommissioned warship. Disgusted by her role in the destruction of an entire planet during the war, Trouble Dog is looking for redemption. When Trouble Dog and Sal Konstanz joined the House of Reclamation, a group of ships who travel space on rescue missions for all beings, they never expected that they would be pivotal in preventing another galaxy wide war.

In Embers of War, Gareth L. Powell manages to mix action and intrigue, in a way that doesn’t overshadow the emotional development of its characters. Their part in the genocide of an entire planet haunts their every moment, and influences all of their decisions. Trouble Dog and Sal Konstanz’s story is one of redemption. They both realize that there is nothing they can do to change the past, but maybe dedicating their lives to saving others is at least something.

So, when the Trouble Dog and her crew stumble upon a military operation that may start another galaxy wide war, it’s not difficult for Sal and the others in their crew to put their foot down. Never again do they want to see the destruction of the last war happen again, especially if they can prevent it.

Embers of War is both an action-packed adventure and a hard-hitting commentary on how far people are willing to go to win and the affect it has on those who have to live with that decisions of those above them. It’s a story of regret, atonement, and taking a stand against seemingly insurmountable odds for the good of others.